Q4 Market Update and Commentary – A Look Ahead to 2023

From all of us at BSW we wish you and yours good health, peace, and happiness in 2023.

We continue to both bless and curse Ol’ Julius Caesar for inventing the 12-month, annual calendar back in 35 BC. It is a blessing that this time marker gives us structure, aligns with the rotation of the big blue ball we all spin upon, and gives an excuse for a one-night-a-year blowout party! It is a curse that so many things that should not be measured annually are anyway.

Well done those observant readers who noticed we did not include “prosperity” in our above New Year’s greeting. –When you think about it, prosperity is a vague term. It means many things to different people, and yet it is one of the most common well wishes to bestow upon a fellow citizen.

Ask most people what prosperity means to them, and many may tell you it is directly correlated with one’s bank account. This is both unfortunate and understandable. Money is an enabler, giving people options to pursue diverse goals and providing security.

At BSW, our goal is to help deliver prosperity (in whatever personal forms that may take) to all our clients. Prosperity can be quantitative and/or qualitative and is elusive because it is a moving target. It can have as much to do with one’s state of mind as it does a financial statement. In that regard, wishing it within a 365 (or 366) day timeframe almost belittles the true meaning of what we hold true as one of our most profound pursuits.

From a “number go up” quantitative standpoint, 2022 was certainly a letdown. Both bonds and stocks fell in tandem for the first time in decades (see the chart below that includes a 60% stock / 40% bond portfolio). The typical Balanced portfolio felt anything but balanced. 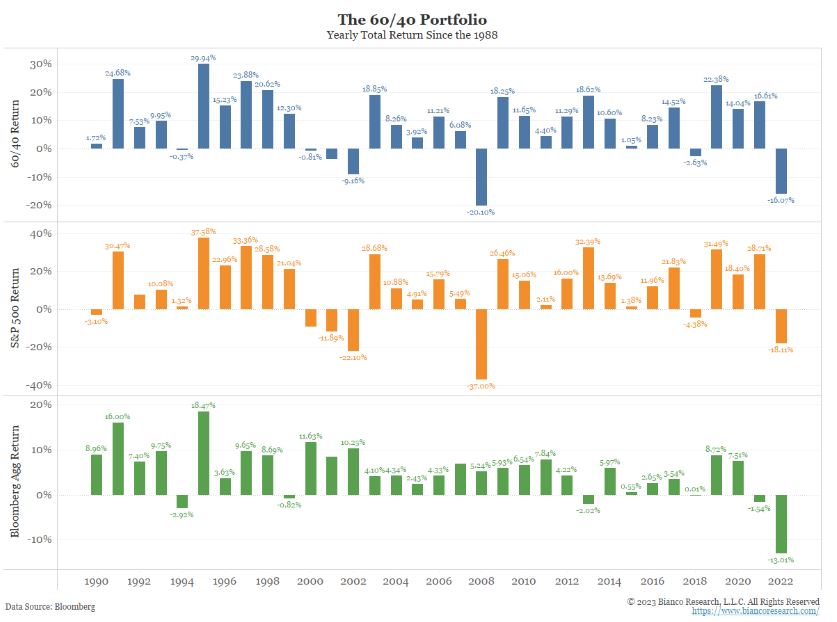 One trip around the sun is not an investment timeframe.

We can’t emphasize this enough. Despite negative returns in 2022, we believe BSW client portfolios are still on track for long-term success. In that vein, nothing changed when 2022 turned to 2023 at 12:00:01 on January 1st. BSW is investing and planning on a continuum that is personalized for each client’s situation. Although it’s been a roller coaster ride, the MSCI All Country World Index is still positive over the past three years.

While the markets did not cooperate last year, BSW attempted to soften the blow by taking the following actions*:

*Due to differing client tax situations and account structures, not all accounts had these actions taken within them.

The losses realized in 2022 can be considered a “tax asset” going forward. These assets do not expire and can be used to offset gains (and, in some instances, a bit of income) going forward, thereby helping lessen future tax bills.

In a nutshell, we believe the market challenges last year had everything to do with inflation and the Fed’s actions to fight it by aggressively raising interest rates. Going into 2022, the market was not positioned for higher rates. As illustrated below, even the Federal Reserve members likely were not expecting to have to hike rates as much as they did throughout the year. 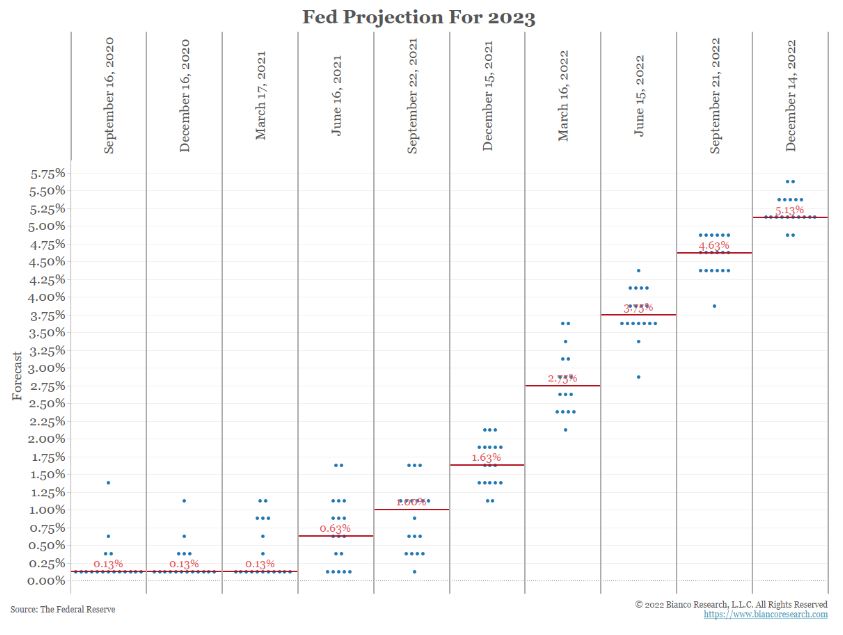 Each column in the above chart illustrates where the Fed projected the Fed Funds rate to be at the end of 2023. Going into 2022, they expected to have raised to 1.63% – a far cry from the current projection of 5.13%!

Not only did the Fed fail to anticipate that inflation would be as long lasting, but they seemingly waited too long to adjust and therefore had to do more tightening in a compressed period. Even now, there is low consensus among Fed governors on how much tightening is left to do. In the below chart, each dot is a Fed governor vote. While 2023 is clustered around 5-5.30%, 2024 is all over the place. Without a common voice, the little market credibility the Fed has left may be fraying. 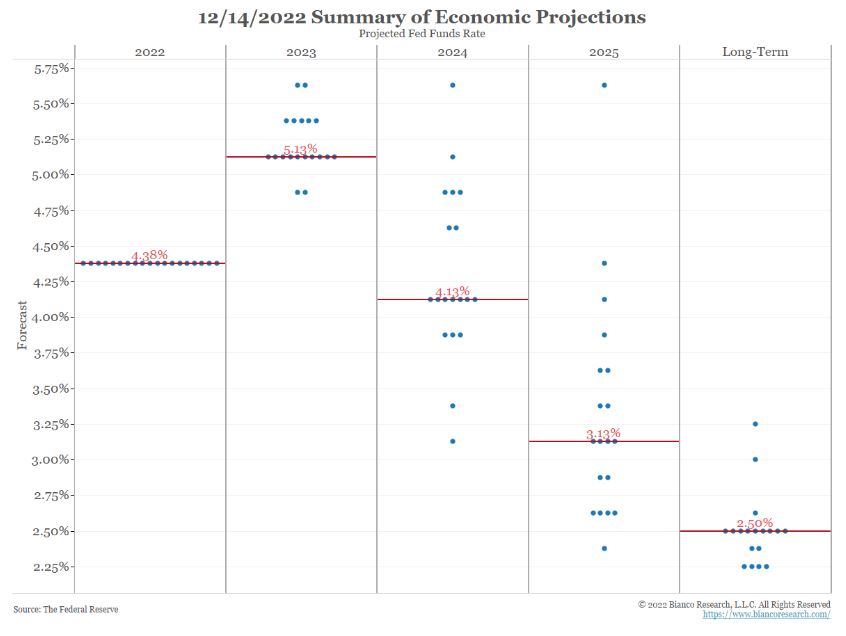 Herein lies, what we perceive, may be the crux of 2023 for domestic stocks and bonds. As witnessed by its reaction functions over the last year, the market desperately wants to go back to the pre-COVID world of low to no interest rates and stimulative policies. Bad news on the economy is, once again, great news for the stock market. As the reasoning goes, that may mean the Fed will be forced to back down on their promise to keep rates high to fight inflation. The thought is that if the economy starts to get bad enough, the Fed will attempt to come to the rescue again. Time again, any whiff of a deterioration in either employment or economic data has brought forth a rally (however temporary) in stocks. 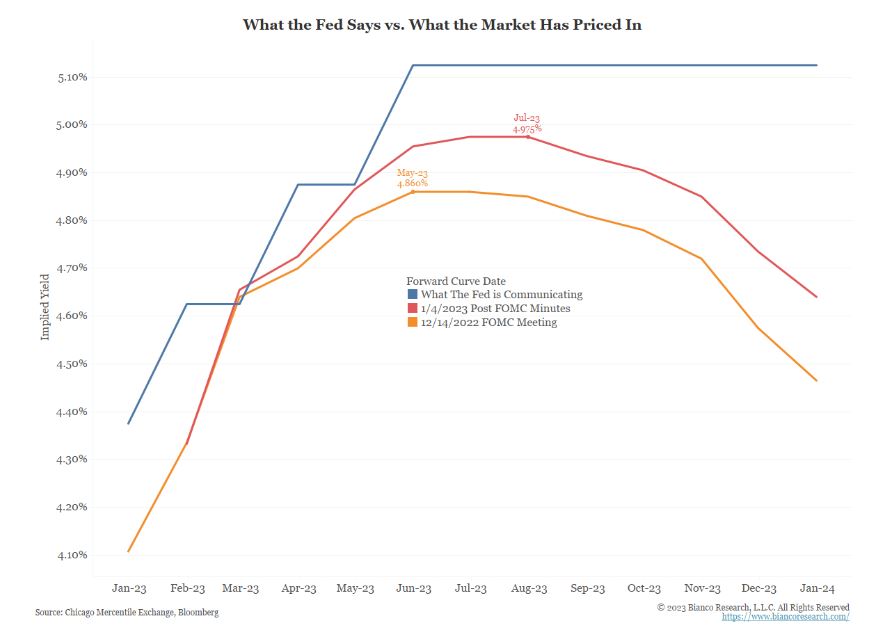 As can be seen from the above chart of Fed Funds expectations, there is a large dispersion between what the Fed is communicating (Fed Funds rate will go above 5% this year and STAY THERE) vs the market, which is pricing in rate CUTS starting in the summer/fall of this year. Both cannot be right. In our opinion, who will blink first remains the biggest unanswered question for 2023.

This can potentially play out in a few different scenarios: 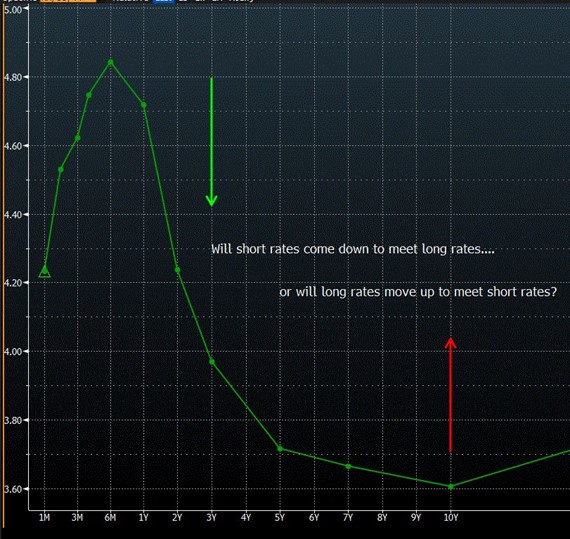 In the former scenario, higher long rates may put pressure on bond pricing again and may also continue to put pressure on stocks – especially highly valued growth stocks. In the later scenario, we could see stocks rally on hopes of lower rates, more liquidity, and a positively sloped yield curve. Remember that a negatively sloped yield curve like the one above is a governor on growth since banks borrow short and lend long.

Putting monetary policy aside, we think the other big themes to watch for 2023 will center around China re-opening and the continued transition from TINA (there is no alternative) to TARA (there are real alternatives).

The re-opening of China after nearly three years of COVID lockdowns may turn out to be a game changer. With the world’s second largest economy coming back online, once again, China’s economy appears to be in an opposite position from the U.S.

Back in 2008/2009, while the U.S. was dealing with the mortgage and banking crisis, China was providing stimulus and did not feel the effects of the financial system fallout. Now, with much of the world on the brink of (if not in) a recession, China is waking up to a potential new upturn in their economy.

The other interesting thing about the China reopening is that we should already have the playbook for this! The U.S. and Europe just went through a COVID re-opening, so we have a good idea how this pans out. We expect that until most of the population obtains herd immunity by getting sick, the economy will go through fits and starts. As the population gets sick and stays home from work, productivity will falter, and consumer demand will wane. However, if the playbook is correct, this should work itself out by the end of Q1 this year. 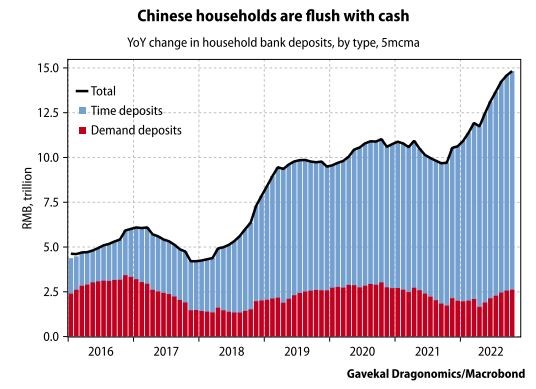 Just like it occurred in the U.S., many Chinese citizen’s bank accounts are currently flush with cash saved up over the past few years. Working from home and not being allowed to go shopping or to travel tends do this.

As consumer demand picks up, we also know that it may overshoot on the upside as animal spirits kick in and Chinese citizens make up for the last three years of doing nothing. Interestingly, Chinese mortgage rates are now at rock bottom historic levels. With the Chinese government also busy shoring up the construction industry after its own problems, this could unleash another property boom in China. 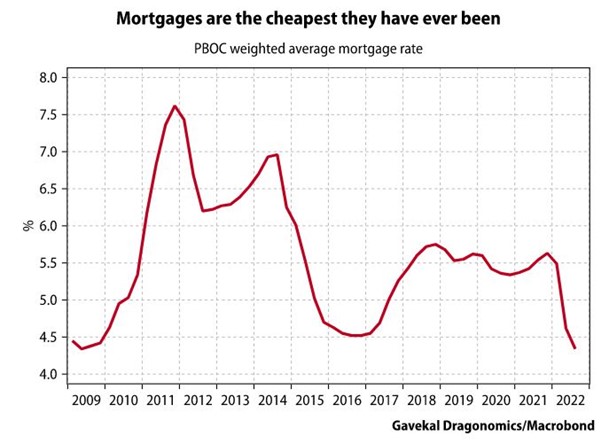 To be sure, the Chinese have also watched the U.S. emerge from our own economic downturn and have observed what happens to inflation when this pent-up demand is left to run its own course. They will likely not let their property sector get too frothy.

The China developments are seen as net stimulative to the global economy and should offer some support during a backdrop of slowing growth in developed economies. The one negative externality to the re-awakening of China may be an increase in inflation impulses – this as China gets back to consuming upwards of 2 million barrels of oil a day and their import machine kicks back into gear. This would obviously work against what the Fed is trying to engineer and could hamper their efforts.

The last of what we feel are the big three themes to watch in 2023 is the growing narrative of a “new paradigm.” The phrase – it is different this time – is often proven wrong by markets, but its undeniable that the investment world looks and feels very different now than before the pandemic.

With interest rates much higher, negative yielding debt essentially vanquished from existence and economic growth slowing, the question remains – have we entered a new investment environment? We mentioned TINA and TARA, the market’s favorite female acronyms. With bonds and cash now providing an alternative, it may redefine how the market views and prices risk. I think it’s clear by now that the “alternative” within these acronyms refers to high growth stocks with very little earnings.

A recent study of the COVID pandemic illustrates that, like past pandemics, it accelerated trends that were en route to happen anyway, and shifted mindsets and behaviors. Could this carry over into what investments are preferred going forward? Time will tell. Although if history is any guide, the biggest and best companies tend to come and go with different investment cycles.

Notice the rotation in not only the sector makeup of the top companies in the world, but the shift in geography. Some are not even around anymore or have been absorbed many times over by competitors and then competitors of those competitors. This is natural and is necessary for innovation and part of the cycle that drives growth and the economy.

To sum up, we think this year will likely continue to be bumpy. The market will need to work through opposing views on inflation, if and how much China will positively affect global growth, and the push/pull between the market wanting to go back to the good old days of almost free money versus the potential for a higher inflation/higher interest rate world.

As I’ve stated before in these pieces, it would be nice to settle out in a world where safe investments pay a “real” yield – a yield over inflation and where money costs something. This would prevent bubbles from forming too often, differentiate good companies from bad, and “de-gamify” investing.

In this world, the most competitive companies outperform the bad ones by a wide margin. Further, due to less leverage in the system, stocks would become less volatile. To make a good return, one might have to be more patient as the big daily and weekly moves would be muted. One can hope.

One of BSW’s New Year’s resolutions is to bring you, our clients and colleagues, more content. We understand that if the market is not cooperating, just knowing why, and understanding our views potentially makes the experience more bearable. Likewise, if something is working well, we also want to tell you that story.

In that vein, expect to hear from us more often in the coming year. We’ll do our best to make these pieces short, digestible, timely, and relevant. Like everything else we do, we’ll strive to keep it fun, informative, and high quality. Stay tuned!

As always, thanks for reading. We look forward to catching up with all of you this year. We love hearing about your families and adventures – big or small! 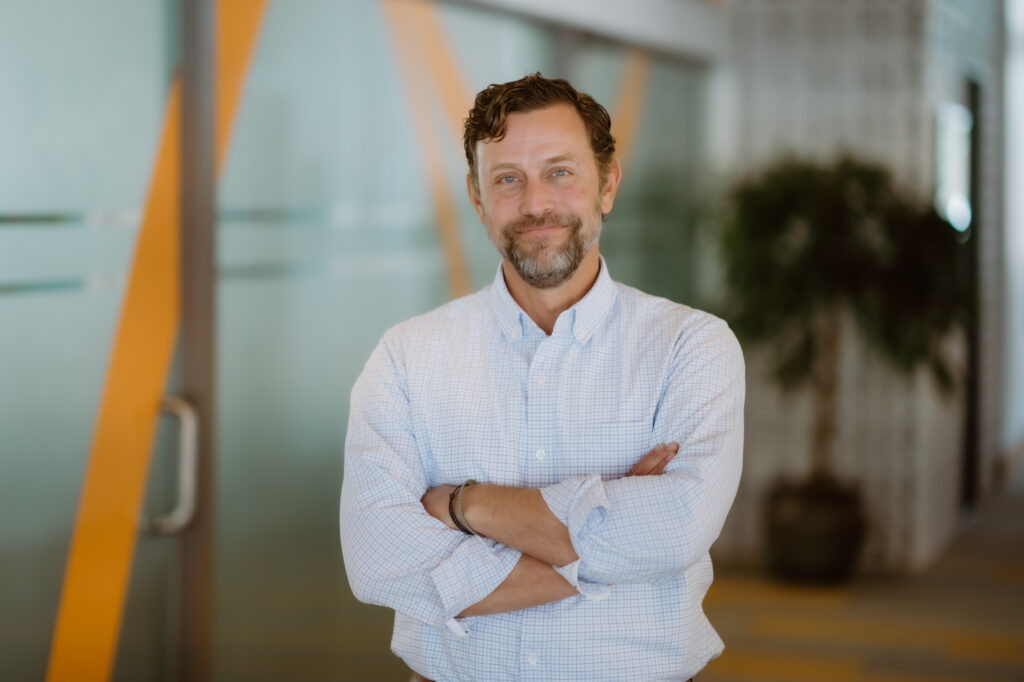